This is the report of pilgrimage at Erzurum, which is a historical city at eastern area of Turkey.

1. While I was going to station to ascertain the train schedule, I saw this rare scene.

This is a horse-driven cart to collect waste baggages.

2. This is another use of horse-driven cart. It carries agricultural produces.

People have raised cattle and horse in this area. They use horse for various purposes.

3. On may way back, I found these people who enjoy tea.

5. The taste of Turkish tea is just like red tea in Korea. They sqeeze a piece of lemon, and drink tea while it is hot.

These kind people bought us two cups of Turkish tea.

7. We just jumped on the bus and went outside of the city.

I took a selfie with a boy who was looking at me with curiosity.

8. A new town was being developed at the outskirt of city which has 400,000 population.

I got off the bus near the last terminal. The surrounding mountains were all rocky.

11. Today we met precious visitors. From India a mother and her daughter came and joined in our pilgrimage.

Those people who read this pilgrimage diary regularly may know her. Her name is You Young Ja.

She was a minister who graduated from Methodist seminary in Korea. She married an Indian seminarian and lived in India.

She was managing a school in New Delhi. She had one boy and one daughter. We met her in February at Dharamshala.

The diary of that day is seen at address below. 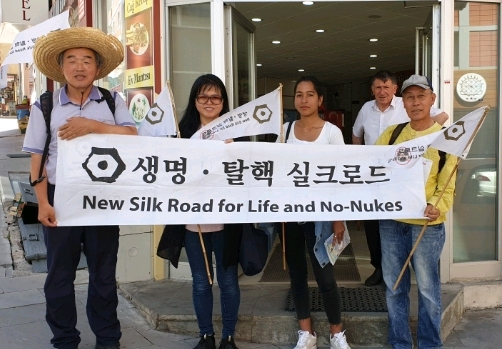 12. From now on, four people walk the pilgrimage course.

Her daughter, Jennie graduated from high school and is preparing for college education.

She had some leisure time and joined in the pilgrimage. We took a picture in front of the hotel we stayed. 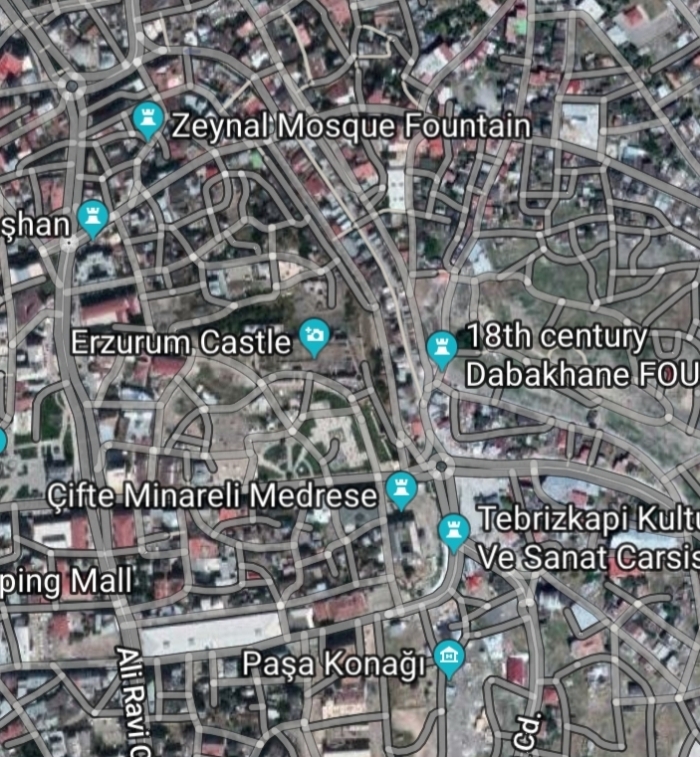 13. I decided to visit historical relics on foot. The blue dots indicate relics.

They are clustered within 2 kilometers.

14. Jennie is walking with vigor.

15. The first relics we visited was an old academy.

16. A selfie with youths

18. The academy was transformed into a museum.

21. The models depict ancient people who are drinking tea.

22. Coming out of the academy, we imitated ancient people,

We had a good time while we drink tea.

23. In front of a private museum, we met a Turkish family who had a Korean relative.

A sister-in-law of the woman in the right-hand side of this picture is Korean. The elder brother of the gentleman with red t-shirt studied his Ph. D. in Korea and married a Korean woman. He is now living in Istanbul.

24. Inside of private museum

25. The private museum collected and showed many antiquities. The owner combined the museum and restaurant.

28. The antiquities showed characteristics of past era of ancient Persia, Roman, and Central Asia.

30. I took a selfie with children at the exit of the museum.

31. A porcelain store nearby. The design of modern porcelains was splendid.

32. We saw walls of old castle. There were many mosques in the city.

Some were big, and some were small.

33. When we were passing by a mosque, there was a religious ceremony going on.

The atmosphere was very solemn.

35. We visited another academy.

36. In front of the academy, this small girl saw me and talked to me first.

She wanted to take a selfie with me. I did the same.

37. I met these ladies who talked me in fluent Korean, “An Nyong Ha Se Yo.”

38. An entrance of relics. Geometrical design of structure was very interesting.

39. There were pagoda-style tombs near the relics.

40. K-drama was very popular in this country. I met many Turkish beauties and took selfie.

Today was a lucky day for me.

41. The lady with blue t-shirt was a psychology teacher who wanted to go to Korea for more study.

42. This beautiful lady was the finishing stroke of today. Ms. You asked her “What is your name” in English.

I think we will meet again in Korea.

43. I approached to walls of old castle.

44. Turkish ice-cream is famous. I paid two lila(400 won) for one vanilla ice-cream. The taste was very soft and chewy.

Ms. You said that they make ice-cream by antelope milk.

45. This is the place where they clean hands and feet before entering into the mosque.

It was another memorable day, today.