1. This is the map of southern Greece where I will travel for one week.

2. Today I will walk about 16km. Though it is a short distance, it will take considerable time because I have to pass through the streets.

3. I went up to Acropolis, today’s starting point.

4. The pavement of uphill road was very sturdy.

5. I rose a small hill next to Acropolis(altitude 156 meters).

6. Among many polises in Greece, Athens had a large flat land along with Sparta. And these two polises confronted with each other for a long time.

7. We can find out the story of these two polises in history textbook. In beginning stage, the Athens was open-minded and had the cultural base for growth. Many people in Athens needed space for shelter. Athens became the origin of city planning. Grid-pattern streets of Hippodamus, and Agora square which enabled the direct democracy appeared in the context of this open-mindedness. 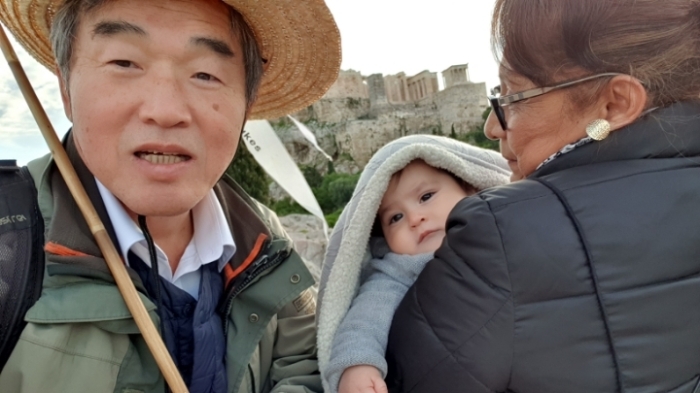 8. I took a selfie with a baby whom I met on the hill.

9. The Acropois was not open on Christmas day. I took this picture at 10 o’clock which was noticed as the starting time of today’s pilgrimage. The remains of Parthenon are seen on the back. 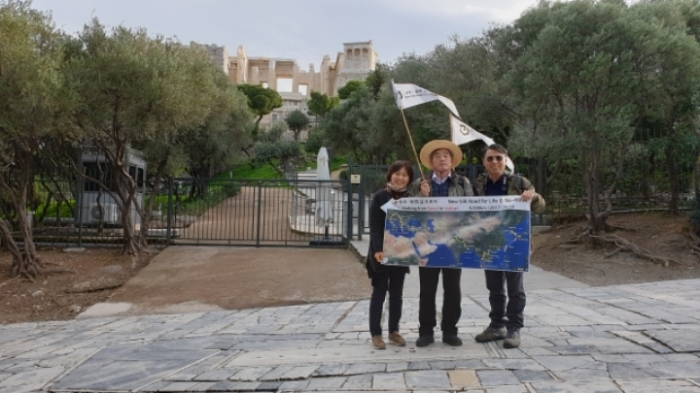 10. The members of Korean Society in Greece did not appear, though I gave notice of my pilgrimage. Instead, I met Korean tourists, and took a selfie with them. 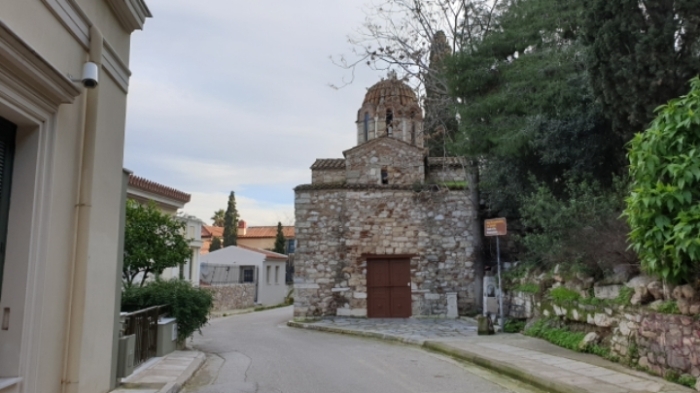 11. I could see a church building on downhill bystreet.

12. I could see many cats at a building of The Old University. 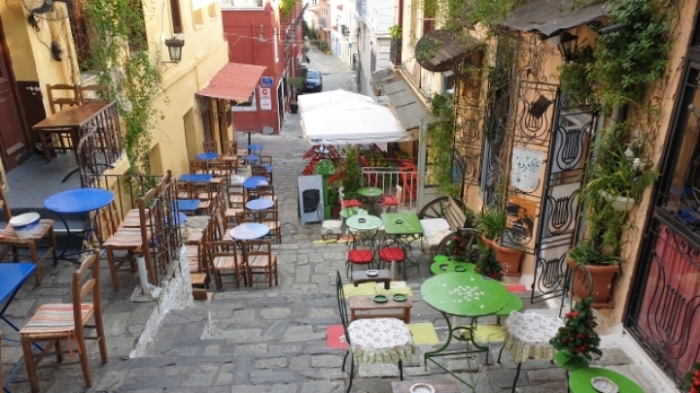 13. There was a cafe at bystreet with steps.

14. I visited again Greek Orthodox Cathedral which I called on yesterday.

I took a picture before starting today’s pilgrimage. 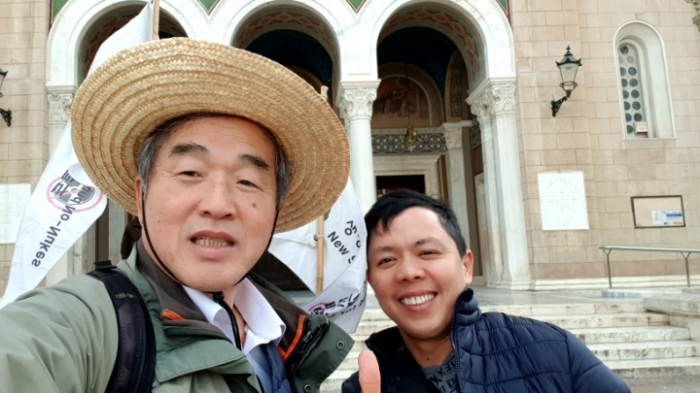 15. I took a selfie with a Filipino tourist who took a picture above.

16. The tourist bus in the street. Residents and tourists are all asleep in the morning of Christmas day. 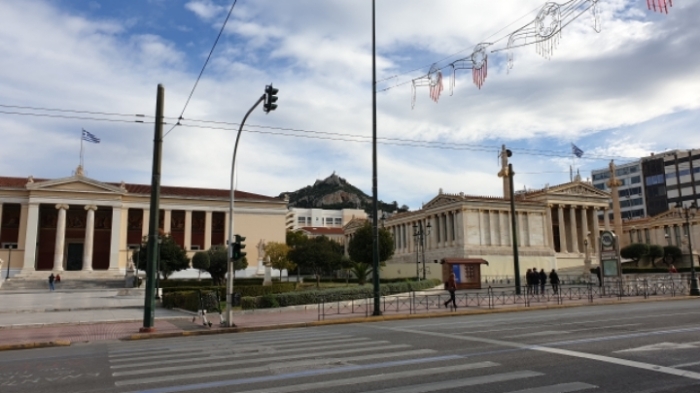 17. Athens Academy is located in the central street.

18. Sometimes in the future, I would like to come back again and take a close look of this place. The name of Athens Academy is famous for the paintings of Raffaello. 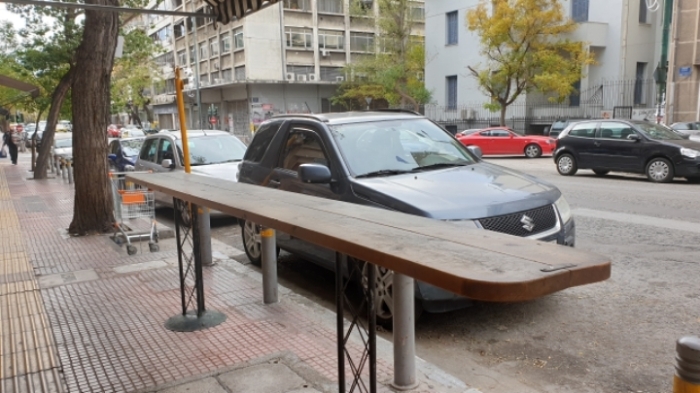 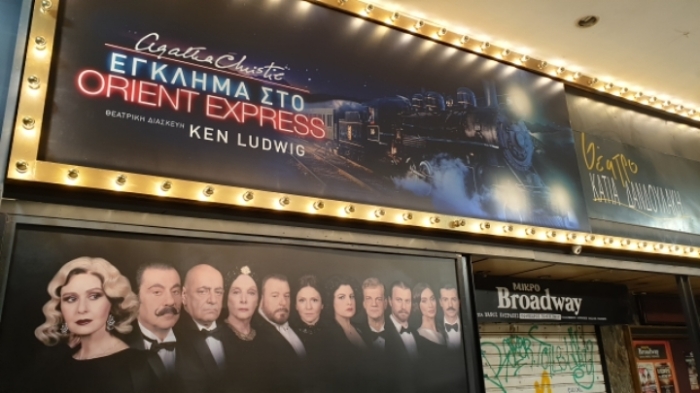 20. While I walked by cinema building, I could see the ad of “Murder on the Orient Express”.

21. When I saw the ad, it reminded me of KS Orient Express which I proposed in my article in the past. I would like to introduce the article again here. 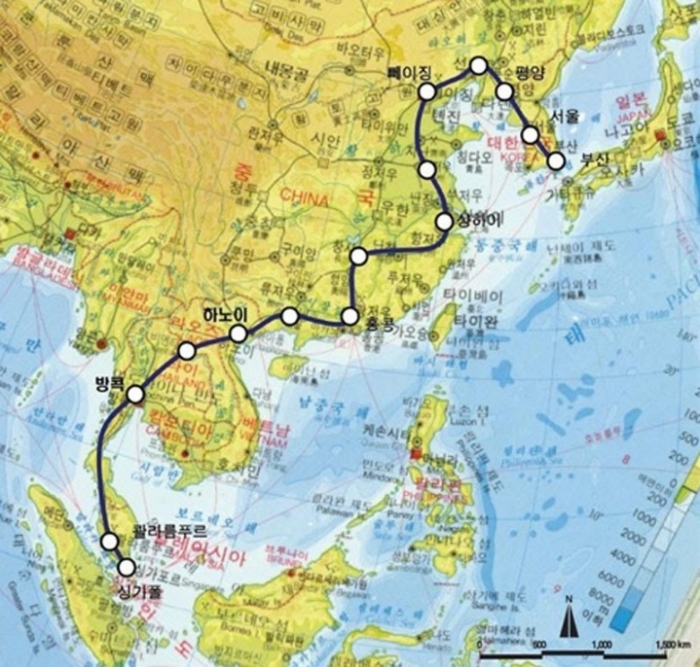 22. This idea was conceived about 10 years ago. And it was revealed in my article written on Media Today around the end of last year.

Nowadays the exchange of people between Korea and China exceeds more than 10 million. If they can travel by train, it will reduce a considerable amount of CO2 and help the Climate Change crisis.

23. Here I could sense the popularity of Baby Shark. 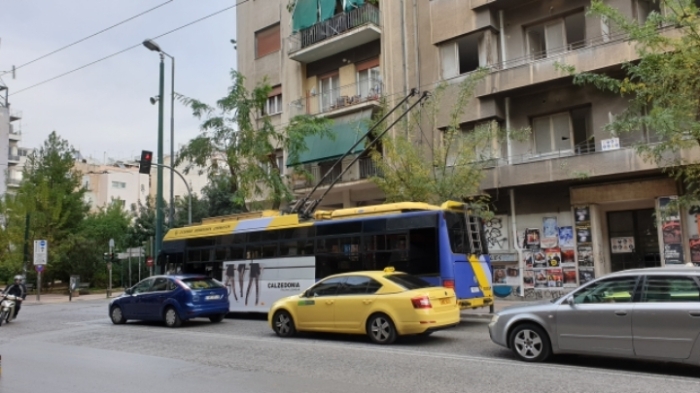 24. Trolley bus which moves by electric cable is operating in the streets. 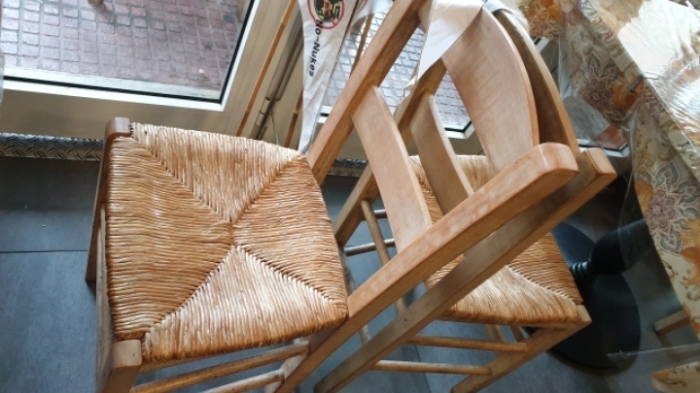 25. I could find a Asian restaurant which is very rare in Greece. The chairs are South-east Asian style. The furniture materials made of wood and straw are recommendable.

26. I could find a familiar shrimp food which I ate from time to time when I travelled in South-east Asia. The price was 10 euro.

27. I was waiting at the crossroad for green traffic light, and I sensed some feeling in the back. I looked back, and found this lady to take of picture of me. She was curious about my apparel. I handed out pamphlet and took a selfie with her. 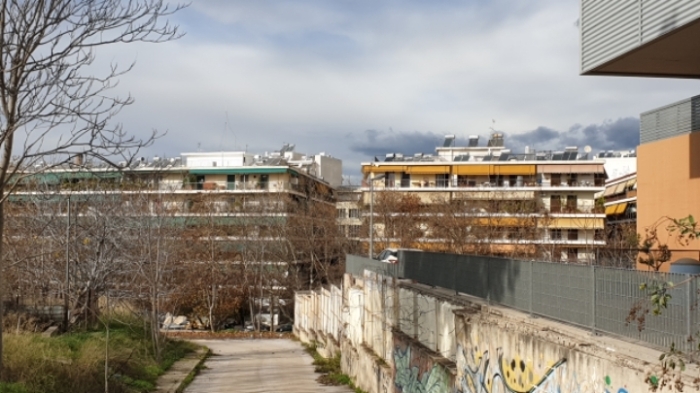 29. The blinds were pulled down to shield hot afternoon sunshine coming from the west.

30. The climate of Greece is warm even in winter. I could see many orange trees. 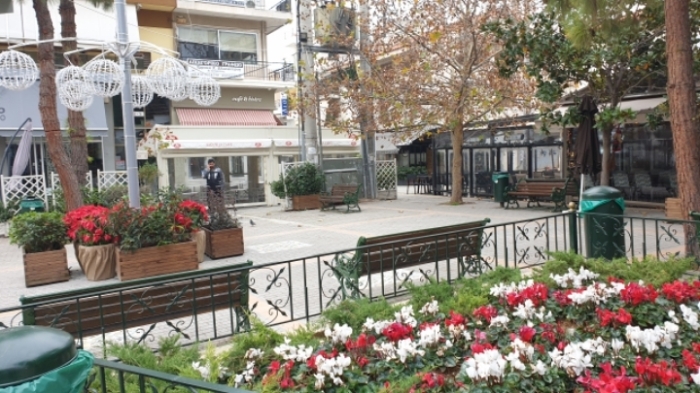 31. Greece is the origin of square culture. I could find small and beautiful squares everywhere in the streets.

32. A modern-type church is located between common buildings.

33. This lady was fascinated by the characters ‘South Korea’ on my back. She seems to be a fan of K-pop.

34. The signboard, eco car, attracts my attention. The design of small cars were dandy. Are these all electric car? 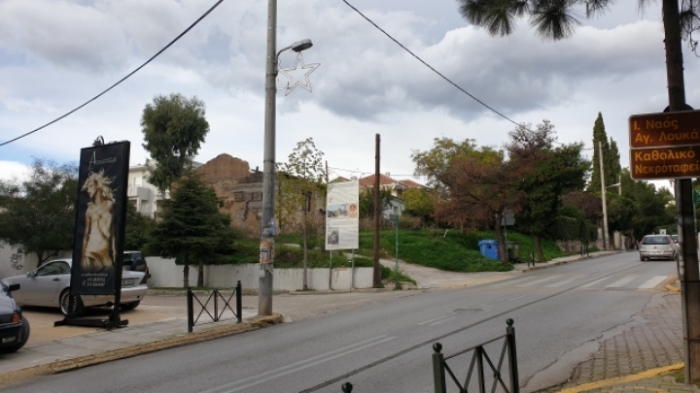 35. I could find an interesting historic relics at a place, 3 km ahead of the finishing point. 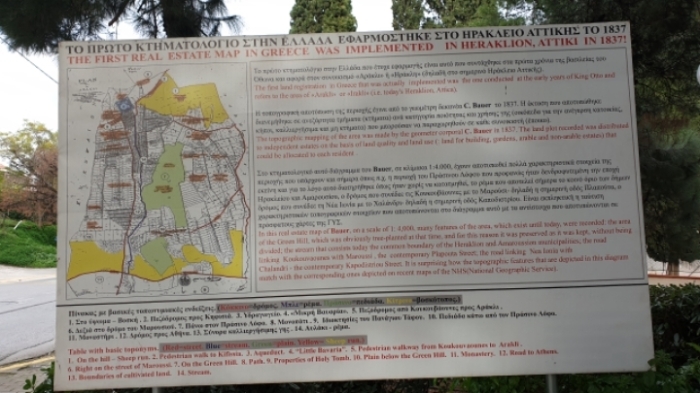 36. At this village, the city planning map which showes survey of real estates and land use was made firstly in Greece in the middle of 19th century. I would like to take a close look later.

37. In addition, the first brewery of beer was found in this village. 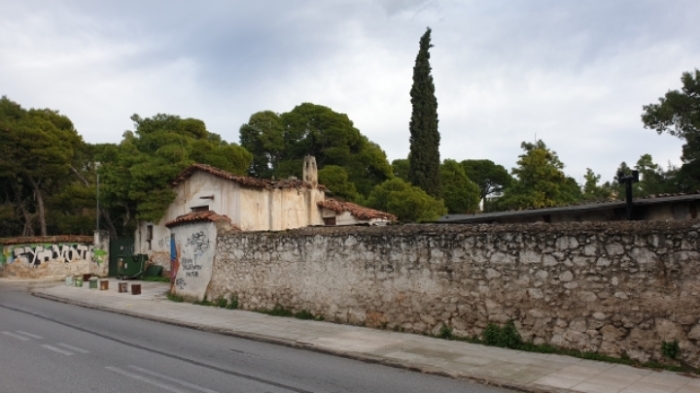 38. It was an interesting place. 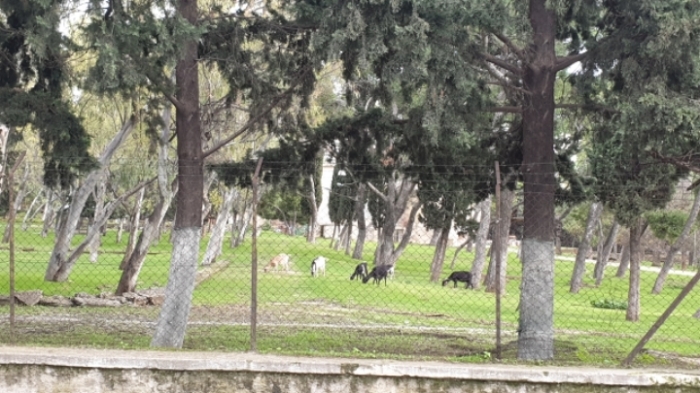 39. The appearance of old farm was preserved in good shape. 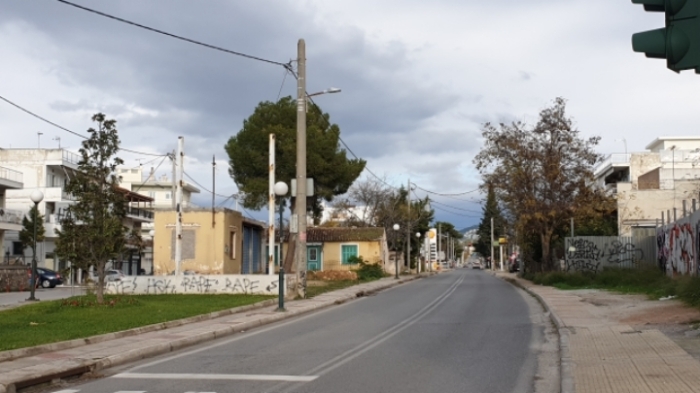 40. I am moving toward suburb. The main transportation is car.

41. In the meantime, I found a good bakery. The owner of the bakery welcomed me.

42. This young man was very curious about my pilgrimage. He asked about the details of pilgrimage. Is he going to join me?

43. One of the family members was this beautiful lady with bright smile.

43. The owner gave ma a bag of bread and cookies. I took out them for photo.

44. And we took a picture together. 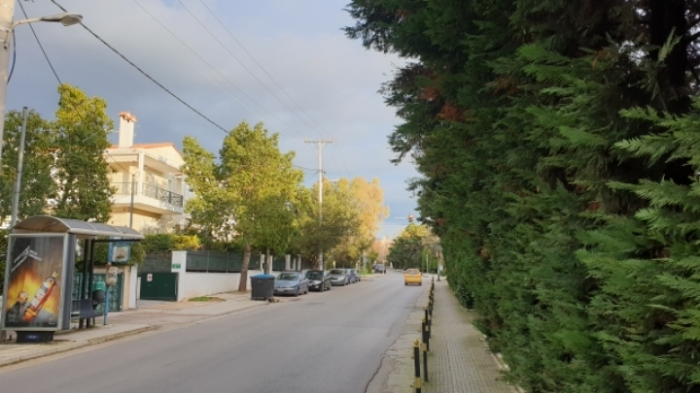 46. Residence area near the finishing point. 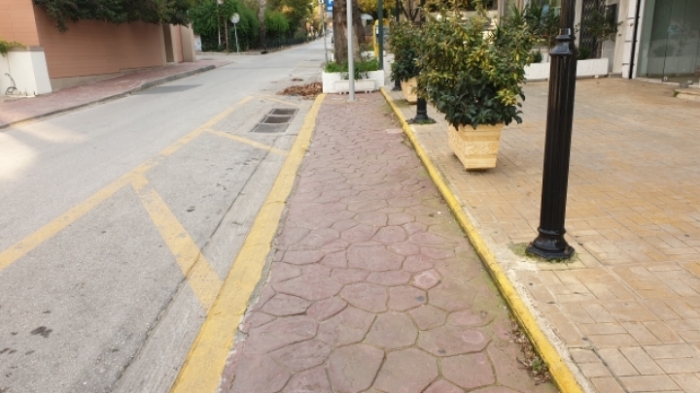 47. The design of sidewalk is Roman=style.

48. Today’s destination is Kifissia station. This is the last station of the oldest electric railroad.

49. I go back to my shelter, which was a starting point of today’s pilgrimage. Tomorrow, I will come to this station by electric railroad, and start again.