Today I am supposed to meet His Holiness Patriarch Bartholomew of Orthodox Church.

1. At dawn, I looked at Bosphorus Strait from Korean guest house ‘LalLalLa.’

2. The sun is rising up above Bosphorus bridge. Orthodox Church is sometimes called Eastern Orthodox Church. The sunrise is very symbolic for today. A ‘pilgrim’ from the East is looking at the rising sun.

3. Since I was free in the morning, I decided to go and see Dolmabahce Palace.

4. While walking in the street, I hear frequently the Korean greeting, “An Nyong Ha Se Yo.”  That Korean greeting seems to be very widely used among Turkish women. I took a selfie with ladies.

5. There are many versions of explanation about this palace.

8. The foreign guests got off the ship and entered the palace directly.

10. The costumes of queen

16. This room is very historic. Kemal Pasha used this room as his office and bedroom as well. I could see the chair where he rested and read book.

17. Judging from the location and direction, he could see the strait and Mediterranean at one glace.

18. This lady is official interpreter Lee Kyung Sook (Clara) for today’s reception. She is fluent in both English and Trukish.

19. We arrived at the cathedral 30 minutes ahead.

20. The cathedral of orthodox church was tidy and modest. 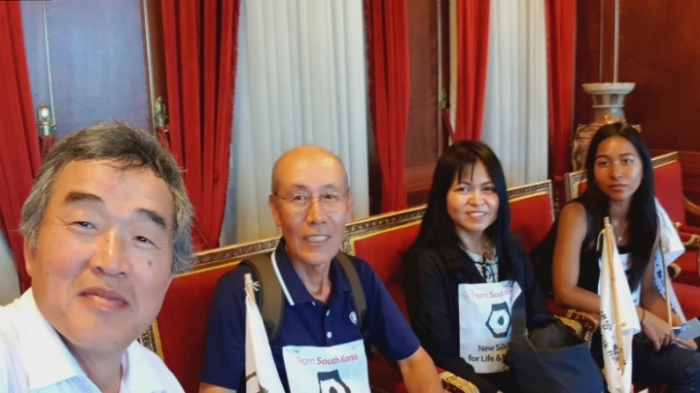 23. While we waited at the drawing room, I took a selfie of us.

24. The reception with the Patriarch started at 4:30 in the afternoon.

25. I offered him the scroll on which “Charter of Earth and Life 2018 Seoul Draft was written.”

The scoll is the same as the one which I offered to Dalai Lama in February.

The Patriarch said, “I visited Korea last autumn. It was my 4th visit to Korea. I prayed for the peace of Korean peninsula at Panmunjeom. I am praying for Korea all the time. I thank pilgrims like your group. You love the environment of the earth and the people in the world. I am very glad to meet you. I have organized 9 meeting related with environment. I know that you are going to suggest an international meeting in Geneva next year. WCC will welcome your suggestion. There are many UN organization in Geneva. I hope your no-nuke movement to be continued.

I said, “Just like a family has father and mother, the earth needs two roles. Right now there is only father-like-UN. There is no mother for the earth. I hope religious leaders play the role of mother of the earth.

The Patriarch said, “I think the Pope can lead the task. I have known the Pope from the days when he was a cardinal. I think he would agree to take the task.

I said again, “Orthodox church and Your Holiness Patriarch initiated WCC. You has familiar relations with Islamic leaders. I think you could play the key role of the task. I politely ask you to take part in Geneva Conference next June, and lead the Conference.

The Patriarch said, “Orthodox Church co-created WCC in 1948. Orthodox Church has continued academic conversation with Islamic leaders from 35 years ago. I am supposed to meet the Pope next month. I wish your hope would be realized. I ask you to work together with the young people. Don’t stop. Continue your effort. God bless you.”

The reception was reported by press as follows.

29. Though it was not well known to the public, you can find out that the role of Patriarch and Orthodox Church is very important. The Patriarch is the head of the religion having a population of 300 million. He has continued communication with Islamic leaders. More importantly, he has strong interest in environment and ecosystem. He has led activities related with environment for a long time. If the mother-like-UN is newly established, his role becomes more important, I think.

30. I came to Bosphorus Strait again.

31. It was a very meaningful day, today.