Today is a monumental day in New Silk Road pilgrimage.

Early in the morning, I went to the temple and waited for the meeting of HH Dalai Lama, with Sang Hoon Lee (retired professor of Suwon University). Up until the day before yesterday there was a big preaching of Buddism, and many people have waited for the meeting of Dalai Lama. His age is over 80 but he have hugged many people who visit the temple. I was assigned to the last seat of visitors by the staff so as to get more time to talk with Dalai Lama. At last, I approached HH Dalai Lama.

2. According to Korean tradition of Buddists, I have to give three bows.

But the staff restricted me to make one bow only. 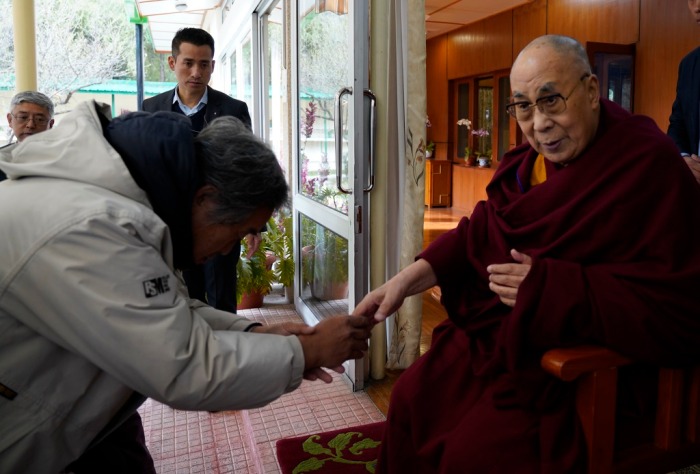 The translator explained in Tibetan when necessary.
Respected His Holiness the Dalai Lama

Great honor to meet Your Holiness, a renowned world leader and receive Your Holiness’s great teaching and guidance on mercy and peace of the global world.

I am a professor from South Korea.
I started to walk from Seoul, on Buddha’s birthday in May 2017.
I walked through Japan, Taiwan, Hong Kong, Vietnam, Thailand, Malaysia, Nepal, and India.
I walked 5,000 kilometers.
Because of earthquake, nuclear power plants are more dangerous than nuclear weapons. Nuclear waste forces the sacrifice of next generations.

Eight years have passed since Hukushima accident in Japan broke out.
But UN has done nothing regarding nuclear power plants safety.
UN has kept silence although there is alternative to nuclear power plants
There is only one earth.
We need new UN which will protect the safety of humans and other life forms.
One family has both father and mother.
We need ‘another new UN’ which will work as mother.
Just like we walk with two legs.

Many people have worked together for 3 years, and made The Earth Life Charter 2018 Seoul (draft).
This Charter inherits the spirit of UN World Nature Charter 1982, and The Earth Charter 2000.

This charter contains the dignity of life, the dismantlement of nuclear power plants, and suggestion to religious leaders of the world.
I offer this Earth Life Charter to Your Holiness.
I will continue to walk until I meet Catholic Pope Francisco at Vatican in Rome.

I appreciate Your Holiness.

5. I spread the scroll on which The Earth Life Charter 2018 Seoul (draft) was written.

I explained briefly about the contents of The Earth Life Charter.

You can find more about the The Earth Life Charter in

6. Dalai Lama understood the core of my explanation. He understood my story about pilgrimage, necessity of making another new UN, and my plan to continue walking until I meet Pope Francisco. 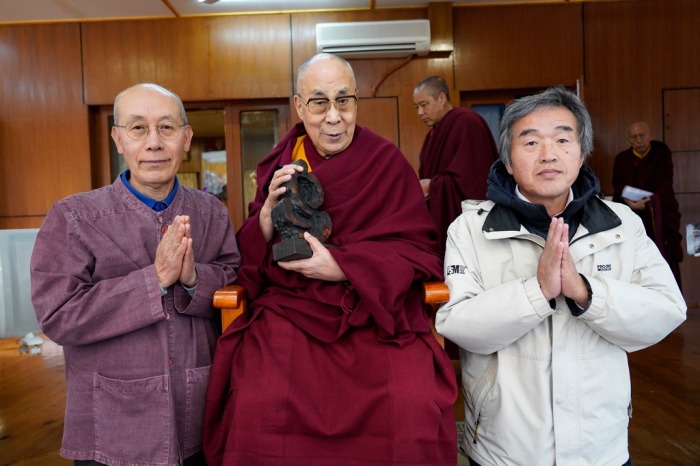 8. I gave him the statue of Buddha as present.

The statue was made by Cheol Guy Kim who was an artist in Korea.

And we took a picture with him.

9. HH Dalai Lama gave a small statue of Buddha as present, confirm‎ing that I and Professor Lee were Buddhist.

10. HH gave me the statue and I received the present. 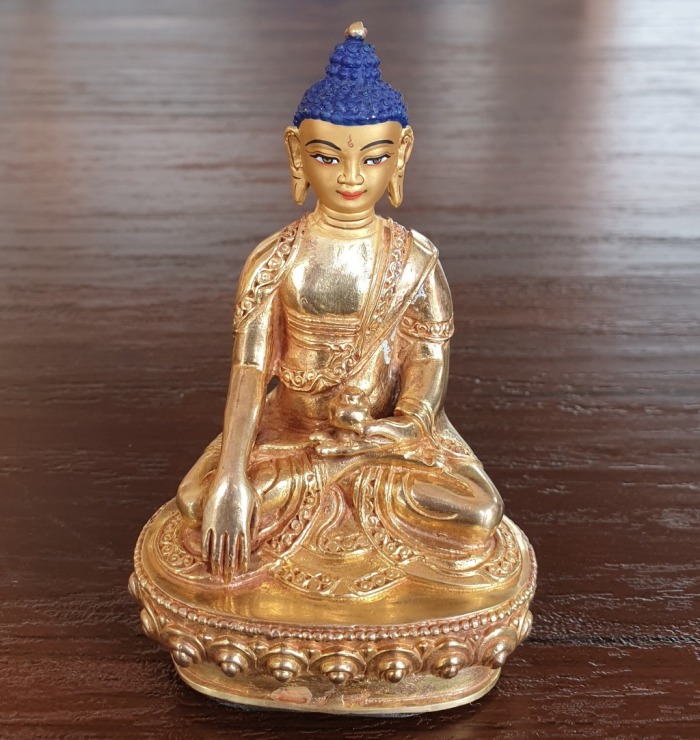 11. The statue was glistering with light.

Receiving the statue from HH Dalai Lama was a great honor.
I would like to express my great appreciation to HH Dalai Lama.

Also, I would like to give my thanks to Jiae Bosal translator, and the staff who took these pictures.

I would like to convey my thanks to all supporters of New Silk Road and all helpers of my pilgrimage up to this honorable day.