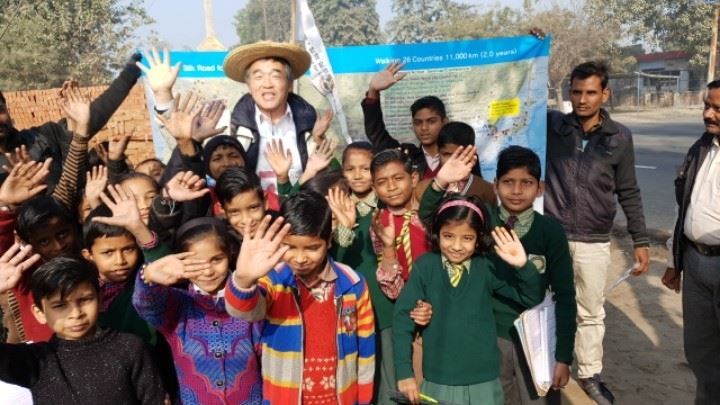 Lee Won-young, an urban engineering professor at Suwon University,
smiles with children during his pilgrimage in India. Courtesy of Lee Won-young

Lee Won-young, an urban engineering professor at Suwon University and the director of Pilgrimage of the New Silk Road for Life and No-Nukes, plans to meet with the Dalai Lama in February to deliver him an anti-nuclear power charter.

The meeting will take place Feb. 25 in Dharamshala, India, where the Dalai Lama’s office is located, he added.

The delivery of the charter is part of his ongoing efforts to raise awareness of the need to better manage and decommission nuclear power plants following the 2011 nuclear disaster in Fukushima, Japan.

Lee with the help of a like-minded group of friends has spent two years to draft the Charter on Earth-Life.

Korean religious and academic figures and foreign scholars from Germany, Thailand, Canada and Japan participated in the drafting and review.

“Over seven years have passed since the Fukushima incident, but the United Nations remains silent,” Lee said.

“If the U.N. was created because of nuclear weapons, a similar body that addresses the threat of nuclear power plants is also needed. Our goal is to establish an organization that is monitored by religious communities around the world.”

Lee also vowed to continue with the “Life Road,” a campaign with the goal of establishing a new international organization comprised of religious figures.

A crucial part of the campaign involves a pilgrimage with participants planning to walk 5,000 kilometers to the Vatican by crossing 18 countries by April 2020. The pilgrims left in May 2017 and have walked 4,000 kilometers passing through 10 countries as of 2018.

Meanwhile, the charter seeks to emulate the values of the U.N. through the “World Charter for Nature,” the “Earth Charter,” he added.

“The charter points to the limitations of the role played by international organizations such as the U.N. and the International Atomic Energy Agency (IAEA). It emphasizes the need for a binding implementation system, not an abstract declaration.”

Its principles include dignity, connectedness, community, responsibility, abolition of nuclear energy and duty to act.