Structural vibrations are occurring throughout the reactor system facilities due to poor replacement of units 3 and 4 of Uljin Nuclear Power Plant. As a result, the steam generator is operating in a very dangerous state due to damage to the SG tube. If it is operated as it is, there is a risk of an accident, so stop the power generation and investigate urgently.

” Kung… Kwang.. Kung.. Kwang..”
As I heard this Bang sound, I pulled my tongue in mind. Here is Uljin, location of Hanul nuclear power plant. It is a loud roar like a cannon firing from the bottom of a steam generator connected to a nuclear power plant reactor.

Why the Bomb Bomb Sound?

As you know, reactors shut down whenever there is an abnormality. In addition to regular inspections, serious breakdowns that are at risk of accidents often occur because it consists of tens of thousands of parts . When a shutdown failure occurs, the high temperature reactor should be cooled rapidly. At this time, steam generators such as a huge seven-story high water tank connected to the reactor and a connecting reactor coolant pipe will have such cooling.
When cooling begins material with begins to contract.(When cooling begins, the expansion of the metal material with heat begins to contract. A great physical force works. When the expansion and contraction of the reactor pipes generated by the operating and stopping of the reactor, the sliding base plate supported the ‘640-ton steam generator’ should move smoothly even in fine thermal variations. If it is not smooth movement, the friction forces in the metal cause friction with another steel plate(base plate) under the slidng base plate. The sound of the moving force bursts from the bottom of the steam generator with such cannon Bangs.

The cannon sound, which bursts out of the huge facility, feels like a huge truck (the weight of the steam generator is equivalent to the weight of 70 15-ton dump trucks) that is clunking due to a clutch failure. Is that it?

This phenomenon has been found in the United States to have similar problems after the replacement of the steam generator. There was a structural problem in Korea’s standard nuclear power plant, which inevitably caused the phenomenon to be severe.

Original metal equipment always causes stress from thermal expansion and contraction. In the light of the experience of the welding expert, vibration occurs during operation if the welding shrinkage load is not considered during construction. If vibration fatigue accumulates, fatigue destruction may also occur.

There are similar cases of damage. The collapse of Seongsu Bridge in Seoul in 1994. It was collapsed by fatigue cracks of welding stress. This risk is applicable to any place with metal equipment.

There is a perfect case when we go back to World War II. The ‘Liberty’ series of ships, which were produced in large quantities at the time, applied a lot of welding technology during the production process. The steel was not suitable and the hull was cracked due to the design and welding problems where stress occurred.

During the voyage, the ship suddenly broke into two pieces and sank.
Including this, about 200 were seriously damaged. Nuclear power plants are no exception.

Welding fatigue destruction of the American cargo ship Liberty built in 1939-1945: about 200 vessels were damaged by fatigue due to material brittleness and welding residual stress.,It occurred mainly in winter (devastation of the brittle).

Problems of Turbine in Hanul Unit 5

I have experienced not only steam generators but also turbines. Nuclear power plants are machines that boiling water with uranium to generate steam and then rotate the turbine to produce electricity. The original core facilities, reactors and steam generators, are in containment building, while turbines that produce electricity are outside containment containers. Welding is also necessary when installing a new turbine. I know it from experience. Stress occurs when a large mechanical metal facility such as a turbine and steam pipe is welded. The stress suppresses the fine movement of the turbine due to thermal expansion, causing vibration in the facility that rotates at high speeds such as the turbine.

Before that, I had suffered from vibration 20 years ago when I installed the turbine of Hanul unit 4. Thus, five years later, when Hanul Unit 6 was newly established in 2003, the author, who was responsible for the turbine construction inspection, applied the know-how of field technology to minimize the occurrence of the stress. It also carefully welds the partial parts, but every time the process is completed, it takes certain physical measures on the welding site to reduce stress generation.

However, the Hanul unit 5 turbine installed at the same time as Hanul unit 6 did not seem to have undergone such a welding process, so the turbine of Hanul unit 5 had a serious high vibration, At that time, the final manager of Hanul Nuclear Power Plant took issue with this. Even though it is a nuclear power plant constructed through the same process with the same design, why is Unit 6 quiet and only Unit 5 loud? After a long time, I did a due diligence and found that many parts in the turbine of Unit 5 were abnormally worn out because of the welding contraction problem caused by the connection welding of the turbine and the pipe.

The accumulated welding stress of the complex structure of the large facilities seems to be a part that the industry and academia have not properly dealt with. According to recent research literatures on welding technology, the problem of technology that properly handles welding stress of large metal facilities is considered to be a research task to be dealt with in depth in the future.

Mr. C, who was in charge of project manager Unit 5,6 , said that he was stressed that he could not sleep for a long time. The latest news is that he has become a vegetative state. It is a pity. The engineer at the scene is like this. If your part is wrong in the field of dealing with severe machinery such as nuclear power plants, you will suffer from such extreme stress because you are suffering yourself. The stress of the machine is moving into your body

The reason for frequent damage to the SG tube is because of the structural characteristics of receiving a complex load at the same time in the sliding base supporting the steam generator. As described above, steam generators usually operate at high temperatures, but sometimes they stop operating when regular inspections or strange signs occur. While the abort is repeated several times, high loads such as tension, compression, shear, etc. are generated, and high thermal stress is generated in the process of repeated expansion and contraction.,Repeated cycles like this cause many problems. In normal cases, the sliding base must slide and operate its expansion contraction freely. However, when deformation occurs, it is not easy to respond to vertical expansion as well as horizontal movement. The original sliding base is sensitive to deformation by stresses, which increases fatigue if repeated high loads acting on it.

This causes unexpected additional loads (thermal stress/installation load) to work during initial design, resulting in deformation, which causes unstable vibrations. At this time, the force is transmitted by the sound of a cannon Bang.

Sliding base at the bottom of the 7 story high water tank (23m height, 4m diameter) : In sliding 40-50mm, there must be no friction against thermal stress during the expansion and contraction.

As a result, the sliding base during normal operation exceeds the design allowance value. This defect was understood as a matter of material until a few years ago, but it has recently been suspected of being a ‘design defect’.
Hanul Unit 3 and Unit 4 is a Korean model APR1400 developed based on the US CE-80 model, which is different from the US. The CE model in the United States has eight anchor bolts in the sliding base that support the load of the steam generator, which are missing from the APR1400 and OPR1000.

The original U.S. technology introduction missed the anchor bolt that endured the earthquake, Therefore, vertical expansion of heat transfer is suppressed, and the wear of a bundle of heat pipes (tubes) with a diameter of 20mm inside the steam generator is severe, resulting in a situation in which the steam generator must be replaced.

Major Korean Power Plant Model APR 1400 improved from OPR 1000. The Design was approved by NRC in USA in Sept. 2019. Korea paid royalty fee about USD 1 billion to USA in exporting to UAE.

The anchor bolt adopts a double nut system, which allows the steam generator to be lifted up when an earthquake occurs, so that it does not interfere with expansion during thermal expansion. If there is an anchor bolt, the sliding base does not deform.

It is not clear how this anchor bolt was missing. Due to this omission, the sliding base is transformed into thermal stress, and the steam generator is inclined without maintaining verticality, and it is in contact with the surrounding structure, and the long time vibration occurs. The influence is delivered to the steam generator inside and the physical force is connected to the SG Tube abrasion. In this situation, even if only a slight shocking earthquake occurs, the result is in unpredictable danger. We are in extreme danger now. 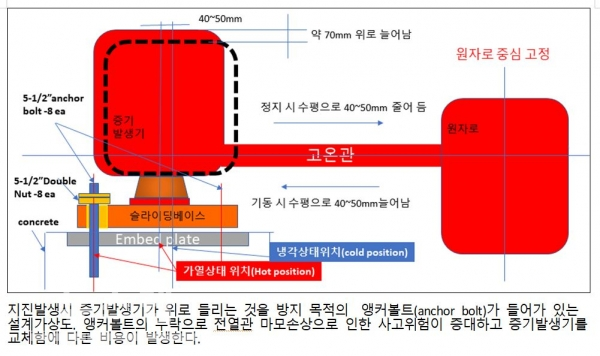 Seismic Design with anchor bolts which prevent the lifting up of the steam generator in the case of earthquake occuring. With the omission of the anchor bolts, the abrasion of SG Tube will increase the possibility of accident and the cost of steam generator replacement.

An objective and transparent investigation is urgently needed.

Particularly, if the steam generator replacement construction is advanced, the piping is cut in the process and it changes and it again welds the piping. At this time, high restrained stress occurs in the welding part, and the size exceeds the design allowable stress. When operated in that state, serious vibration occurs and the SG Tube is placed in danger of fatigue crack and damage due to vibration stress.
Hanul Units 3 and 4 are at risk; steam generator defects and leakages increase the pressure inside the containment container and affect the stability of the reactor, leading to a dangerous state. It is presumed that nuclear power plants with similar structures such as Ulsan Shin-Kori Unit 3 and Hanbit Units 3,4,5, and 6 in Yeonggwang, Jeonnam, which are applied with the same model, have the same problem.

I have continuously raised this problem from the last regime to this regime. But for some reason, the Nuclear Safety Commission has only been tinkering with it. It is in a very dangerous state. Nuclear risk is essentially an international problem. An accident will endanger the global community. Recently, he was invited as a lecturer to the Preparatory Committee for the Nuclear Energy Risk Public Interest Reporting Center and informed the nuclear technology experts in Germany and Japan. Now they were starting to review it together.

Nuclear power plants suspected of danger, including Hanul Units 3 and 4, should be shut down and conducted a thorough investigation. It should be a transparent and objective investigation.
No more cannon Bangs!

Like Loading...
‹ [The Kyunghyang Newspaper] Nuclear Power Plant and ‘Pandemic’
[YouTube] Why nuclear power plant is not an alternative to the climate crisis(Prof. Yun Sun Jin) ›