Many Koreans were living at Tashkent and Samarqand in Uzbekistan.

Samarqand is a famous city for historical relics.

1. The distance from Tashkent to Samarqand is 313 km.

2. There were two Tashkent stations. The ticketing station and starting station were placed at different location.

I almost missed the train.

5. We met a Chinese traveler in the train. She lived in Dunhuang.

She married an American and had two kids. She had a vacation for travel.

We became friend with her and had lunch together.

6. We became friends with Tashkent people sitting in opposite seat. 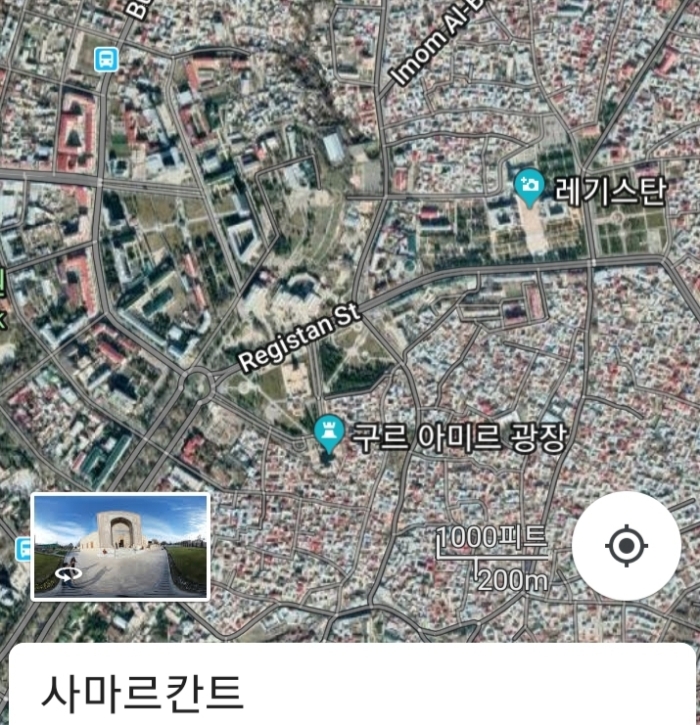 14. I saw this painting in the hotel lobby. With a close look, you can find many historical figures in the painting.

15. This is the entrance of Samarqand Restaurant.

17. A traveling couple from South Africa joined in the lunch.

He boasted beautiful scenery of South Africa in smart phone.

18. The barbecue was very nice.

19. After lunch, delightful music was played. A group of women went to the front and started to dance. 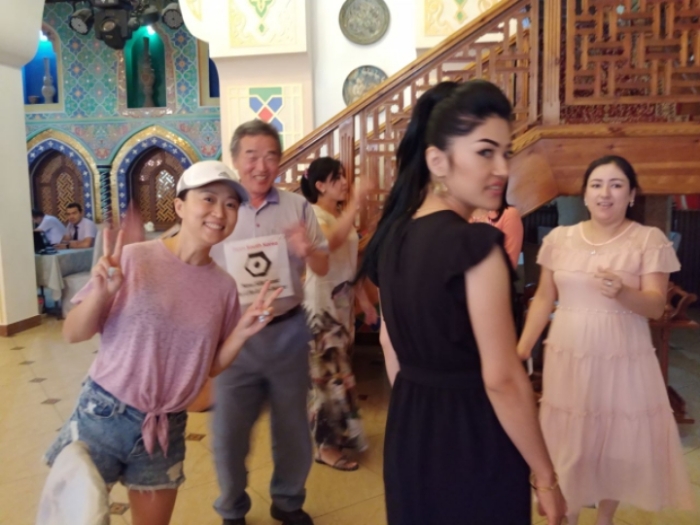 21. The couple from South Africa, professor Lee, Chinese woman, and I joined in the dancing.

It was an happy hour unexpected.

22. We departed from luncheon group, and walked to the historical relics 3 km away.

There was an wedding place next to the restaurant. I could see women with formal dress.

These women found out that we are from Korea. They were happy to pose for photo.

23. Water melon from the countryside. This region has dry climate. The water melon had good taste.

25. This area seems to be old streets.

26. I could see Korean restaurant.

28. Finally we arrived at Islamic relics registan. Details are found in the address below. 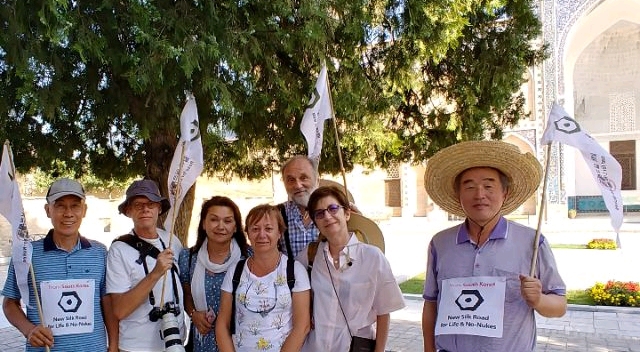 He explains about New Silk Road to the tourists, and make them sympathize and pose for photo.

34. This is cemetery facility of Kings of Timur empire, 1 km away.

35. This picture shows Amir Temur who was a great conqueror.

Uzbekistan people are proud of him.

36. The total territory in Central Asia which he conquered.

37. The black coffin in the center is that of Temur. Kings after Temur are resting here.

38. The atmosphere inside is somewhat solemn and impressive.

41. At the entrance, they were selling porcelain with Islamic design.

42. I said “Hello!” to a baby on the spot. I succeeded in taking a picture with him.

43. These women were walking toward us. They were curious about us. We took a picture with them.

44. A selfie with statue of Amir Temur.

45. We walked quite a distance in order to take bus going to Samarqand station.

46. A very enthusiastic woman helped us to ride on the bus.

This woman was kind enough to discount bus fare by 1000 sum.

47. I took a selfie with the enthusiastic woman.

48. I took a selfie with the girl students who were looking at us. I gave pamphlet to the girls.

We got on the train 7:19 in the evening. We arrived at our shelter in Tashkent over 11 o’clock at night.

It was an interesting day which was full of events.