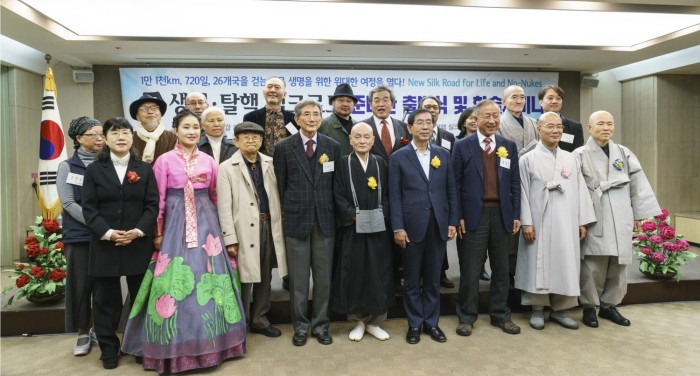 Seoul Mayor Park Won-soon joined to deliver a congratulatory message wishing the Preparation Committee the best and his full support.

As Part II of the meeting, a seminar was held where a panel of South Korean scholars discussed the significance of the New Silk Road for Life and No-Nuke from the perspective of the history of civilization.

Anthropology Professor Park of Hanyang University spoke from an anthropological perspective arguing that the term civilization should be understood as culture since it has a social Darwinist connotation. Below is the abstract of his presentation.

A common sense response to the idea of the New Silk Road would be negative, if not considered as a farfetched dream. However, just by looking back at the last decade, the first half of the 2000s, from a perspective of the history of civilization, it is clear that the people on this Earth is more than capable of uniting and acting together for justice, life and no-nuke. Examples are the 1999 Seattle Protest against the WTO, the Stop the War Global Day of Action on February 15, 2003, and the series of The World Social Forum.

Nevertheless, in order to realize the New Silk Road for Life and No-Nuke which not only seeks to bring people from 26 countries to walk together calling for the establishment of an international organization to monitor and decommission nuclear power plants worldwide but to establish such an international organization, the participants need to have anthropological understandings about culture. The understanding that cultures interact and change allows us to guard against the idea that the world divided into different cultures heading toward clashes. Cultural interactions do not bring clashes but changes for the better. In addition, the understanding that culture is not the same as nature criticizes the thinking that cultural differences are similar to biological differences.

Lastly, it is critical to understand that individuals as an agent of change make up a society which is controlled by a certain structure of power. It is the society or structure that shapes or mold individuals into different nations but it is individuals who break the mold of nation to build an international movement for change. Therefore, the New Silk Road for Life and No-Nuke must empower ordinary individuals for changing the structures of power by sharing the common experiences of resistance and mobilization against injustice.